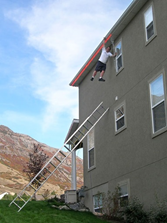 This guy is the reason we invented the Ladder-Max standoff stabilizer.

He’s not a complete idiot. He just has a big job to do—hang the Christmas lights on the second story eaves—and he’s got to move that ladder over and over to get the job done. He wants to get the job done fast. Because he has other things to do. Fun things. Things that don’t involve an extension ladder. Or ladder accessories like a standoff.

That’s why we made sure the Ladder-Max standoff stabilizer goes on your ladder in less than ten seconds. Fast. Ten seconds fast. Every time. And once it's on, the ladder can be moved with the standoff stabilizer attached. So you, too, can get to those other, fun things you have to do that don’t involve an extension ladder.

By the way, did you notice the extremely uneven ground under this guy’s ladder? I mean, under where it used to be? He could have used a Quick Connect Ladder Leveler, too. Also attaches in seconds.

Below: an illustration of one of the many reasons women live longer than men. Yep, that’s a heavy-duty professional-grade yet reasonably-priced Ladder-Max standoff stabilizer she’s using to put up Christmas lights on the second story. Just like our guy above. Only safer. And saner. And faster.